Sinners’ Opera is set in Charleston, South Carolina, one of my favorite cities in the world (that I’ve visited).  It’s beautiful and on the ocean—two requirements of being a favorite. I’d simply love to live in one of the Antebellum mansions along the Battery. If you ever visit Charleston, take a buggy ride around the historic sights.

Charles Towne was founded in 1670, during the reign of Charles II of England.  This is important in the book because Morgan (the hero) became a vampire in 1659, and in

1670, the King sent him to the new colony to inspect its progress. Later, he returns to watch over a baby girl (the heroine) as she grows to womanhood.

Charleston boasts cobblestone streets, horse-drawn carriages, and pastel Antebellum houses, particularly in the elegant French Quarter and Battery districts. The Battery promenade and Waterfront Park both overlook Charleston Harbor. Fort Sumter, a federal stronghold where the first shots of the Civil War were fired, is across from the Battery.

Two beaches, Folly Beach and Isle of Palms, are near Charleston. Another requirement for a favorite of mine.

In nearby Mt. Pleasant, you can visit Boone Hall plantation. Some of the tours they offer are, “Exploring The Gullah Culture”, House Tours, Plantation Coach Tour, Black History In America Exhibit, Slave Street and History Presentation, Garden Tour, and a Butterfly Pavilion. 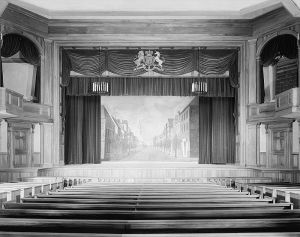 My personal favorite is the Dock Street Theater, America’s first theater. On February 12, 1736, the Dock Street opened with The Recruiting Officer. Flora, the first opera 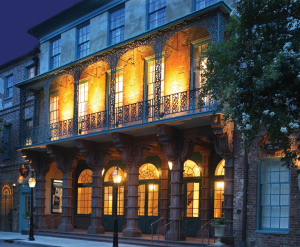 performed in America took place at the Dock Street. Now, the Dock Street is owned and managed by the City of Charleston. I was enthralled by it when I went for a concert. The Dock Street looks like a 17th century playhouse with rows of wooden benches in the orchestra seating. The boxes overlooking the floor are draped in dark green, almost black velvet. The stage backdrop is an antique tapestry of Charleston Harbor. Photo Credit:  By Frances Benjamin Johnston

The Battery is a street along the seawall on the Atlantic Ocean. The pastel and colorful Antebellum mansions cost in the millions. When I was writing Sinners’ Opera, I drove up and down the Battery until the residents must have thought I lived there…or was a stalker. I finally chose a house for my hero. It’s Roper House, a brick structure with green shutters and a Greek portico to the left. A beautiful house, but because the main attraction, the portico, is on the side, it looks like the house has its shoulder to the sea.  A house with secrets.

I’ve driven those cobblestone streets in my little red Miata, eaten at some good downtown restaurants (never made Magnolias for shrimp and grits), and have gone to the Dock Street for a piano concert.  Morgan is a concert pianist, an English lord, and a vampire.

If I haven’t yet inspired you to visit Charleston on your next vacation, what can I say?  Real movie stars are moving to Charleston, and it is one of the most concentrated centers of wealth in this country. It’s also famous for art (Spoleto), culture, and history—and entertainment galore.