The Highwayman, along with The White Cliffs of Dover by Alice Duer Miller, are my favorite poems.  I’ve included the entirety of the poem. I wrote a story in humble homage to this epic, and have sent it to my editor for a new anthology of the unearthly.  My story Gypsy Ribbons is a ghost story about a lady and a highwayman.

Here is a bit of Gypsy Ribbons:

Hooves clattered in the darkened courtyard. Sparks shot from the stallion’s iron shoes as he slid to a halt, climbing the air in a full rear. Aidan leapt from the saddle, his red velvet cloak billowing in a bitter gust. The flamboyant cape was a slap in the face of the authorities. His smile faded as a dark premonition crawled down his backbone. He squared his jaw, ignoring superstition and the chilling call of his Irish blood. Silence ebbed and flowed like the tide of clouds washing over the moon.

Darby Manor was shuttered and barred, but Aidan knew who waited alone in a big, soft bed. His heart quickened as a bolt of desire shot through him. His love would be in her pristine white nightdress, often sacrificed to their passion along with his clothes. The thought heated him, but he had an assignation with a royal coach before dawn. Excitement glazed his skin as the scent of heather blew on him. Bloody cold night. Yet he was glad clouds hid the moon. Darkness made his job easier. He rested his whip on the cobbles and leaned on the hilt. Wind screamed around the corner of the house, whistling a lament.  He hated this place. The house itself seemed to resent any intrusion.

Even the recent return of Lady Victoria Darby.

A month ago, she’d arrived in a handsome carriage on a sunny November Sunday. Since the house had been deserted for some time, Aidan was in the parkland grazing his horse before returning to the inn that was his home. He robbed the King’s Highway and lived with other brigands, but he didn’t liken himself to those cutthroats and thieves. Still, when he glanced at Darby Manor, even in daylight, shivers chased down his spine. The beautiful Lady Darby disembarked in all her finery. A blue satin dress caught the golden afternoon sun, flashing a myriad of iridescent colors. She turned, and his breath caught, but his heart leapt into a gallop. Why was there no battery of servants? Had she hurried to the country unaccompanied except for the woman bustling along in front of her?

He’d heard rumors that Lady Darby was willful and reckless. Perhaps, she’d given society the slip and escaped to the Manor with only her lady’s maid for company. The servants summoned from the village were long gone by nightfall. Darby Manor had a reputation for being haunted. Most locals believed that when the ghost sighed at the door, someone close to you was going to die. Personally, he didn’t hold with these old wives’ tales, but he had to admit the manor was a forbidding place.

A light snow began to fall, snapping Aidan’s attention back to the present. He turned up his collar against the silken mist and dusted a few flakes off his red velvet shoulders. As Lady Luck would have it, Virginia Darby had escaped the London Season and her husband. She was reckless and willful, and here he was on a winter’s night whistling a whippoorwill call beneath the Lady’s window  If he were William Darby, he wouldn’t let his wife run wild on the wilder Yorkshire moors.

Goliath snorted, dancing on the slick stones. Gooseflesh prickled Aidan’s arms. The hair at his nape quivered. He tensed, his hand on his sword. I’m being watched. The feeling shuddered over him so hard he felt his insides shake. Whipping his weapon from the scabbard, he whirled. Naught but shadows fleeing from a shaft of moonlight. He shrugged deeper in his cloak and whispered a laugh.

This, at last, is The Highwayman:

BY ALFRED NOYES
PART ONE 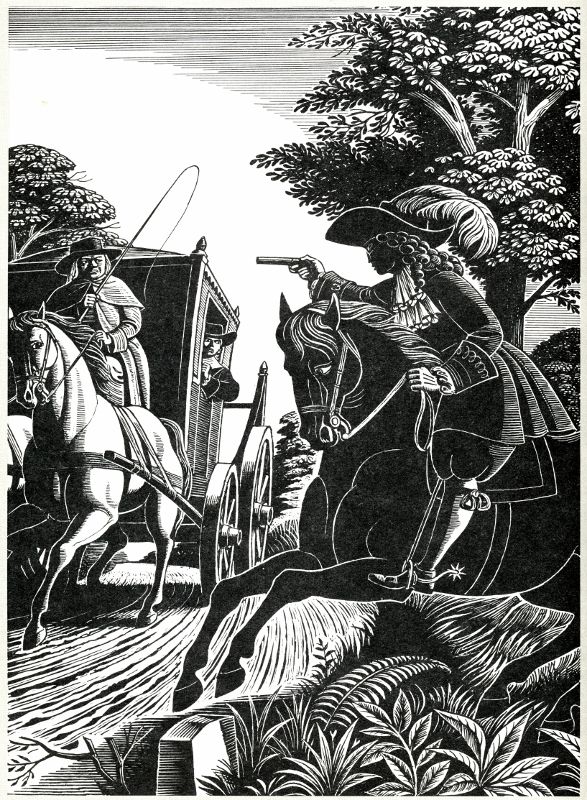 The wind was a torrent of darkness among the gusty trees.
The moon was a ghostly galleon tossed upon cloudy seas.
The road was a ribbon of moonlight over the purple moor,
And the highwayman came riding—
Riding—riding—
The highwayman came riding, up to the old inn-door.
He’d a French cocked-hat on his forehead, a bunch of lace at his chin,
A coat of the claret velvet, and breeches of brown doe-skin.
They fitted with never a wrinkle. His boots were up to the thigh.
And he rode with a jewelled twinkle,
His pistol butts a-twinkle,
His rapier hilt a-twinkle, under the jewelled sky.
Over the cobbles he clattered and clashed in the dark inn-yard.
He tapped with his whip on the shutters, but all was locked and barred.
He whistled a tune to the window, and who should be waiting there
But the landlord’s black-eyed daughter,
Bess, the landlord’s daughter,
Plaiting a dark red love-knot into her long black hair.
And dark in the dark old inn-yard a stable-wicket creaked
Where Tim the ostler listened. His face was white and peaked.
His eyes were hollows of madness, his hair like mouldy hay,
But he loved the landlord’s daughter,
The landlord’s red-lipped daughter.
Dumb as a dog he listened, and he heard the robber say—
“One kiss, my bonny sweetheart, I’m after a prize to-night,
But I shall be back with the yellow gold before the morning light;
Yet, if they press me sharply, and harry me through the day,
Then look for me by moonlight,
Watch for me by moonlight,
I’ll come to thee by moonlight, though hell should bar the way.”
He rose upright in the stirrups. He scarce could reach her hand,
But she loosened her hair in the casement. His face burnt like a brand
As the black cascade of perfume came tumbling over his breast;
And he kissed its waves in the moonlight,
(O, sweet black waves in the moonlight!)
Then he tugged at his rein in the moonlight, and galloped away to the west.
PART TWO
He did not come in the dawning. He did not come at noon;
And out of the tawny sunset, before the rise of the moon,
When the road was a gypsy’s ribbon, looping the purple moor,
A red-coat troop came marching—
Marching—marching—
King George’s men came marching, up to the old inn-door.
They said no word to the landlord. They drank his ale instead.
But they gagged his daughter, and bound her, to the foot of her narrow bed.
Two of them knelt at her casement, with muskets at their side!
There was death at every window;
And hell at one dark window;
For Bess could see, through her casement, the road that he would ride.
They had tied her up to attention, with many a sniggering jest.
They had bound a musket beside her, with the muzzle beneath her breast!
“Now, keep good watch!” and they kissed her. She heard the doomed man say—
Look for me by moonlight;
Watch for me by moonlight;
I’ll come to thee by moonlight, though hell should bar the way!
She twisted her hands behind her; but all the knots held good!
She writhed her hands till her fingers were wet with sweat or blood!
They stretched and strained in the darkness, and the hours crawled by like years
Till, now, on the stroke of midnight,
Cold, on the stroke of midnight,
The tip of one finger touched it! The trigger at least was hers!
The tip of one finger touched it. She strove no more for the rest.
Up, she stood up to attention, with the muzzle beneath her breast.
She would not risk their hearing; she would not strive again;
For the road lay bare in the moonlight;
Blank and bare in the moonlight;
And the blood of her veins, in the moonlight, throbbed to her love’s refrain.
Tlot-tlot; tlot-tlot! Had they heard it? The horsehoofs ringing clear;
Tlot-tlot; tlot-tlot, in the distance? Were they deaf that they did not hear?
Down the ribbon of moonlight, over the brow of the hill,
The highwayman came riding—
Riding—riding—
The red coats looked to their priming! She stood up, straight and still.
Tlot-tlot, in the frosty silence! Tlot-tlot, in the echoing night!
Nearer he came and nearer. Her face was like a light.
Her eyes grew wide for a moment; she drew one last deep breath,
Then her finger moved in the moonlight,
Her musket shattered the moonlight,
Shattered her breast in the moonlight and warned him—with her death.
He turned. He spurred to the west; he did not know who stood
Bowed, with her head o’er the musket, drenched with her own blood!
Not till the dawn he heard it, and his face grew grey to hear
How Bess, the landlord’s daughter,
The landlord’s black-eyed daughter,
Had watched for her love in the moonlight, and died in the darkness there.
Back, he spurred like a madman, shrieking a curse to the sky,
With the white road smoking behind him and his rapier brandished high.
Blood red were his spurs in the golden noon; wine-red was his velvet coat;
When they shot him down on the highway,
Down like a dog on the highway,
And he lay in his blood on the highway, with a bunch of lace at his throat.
.       .       .
And still of a winter’s night, they say, when the wind is in the trees,

When the moon is a ghostly galleon tossed upon cloudy seas,

When the road is a ribbon of moonlight over the purple moor,

A highwayman comes riding, up to the old inn-door.

Over the cobbles he clatters and clangs in the dark inn-yard.

He taps with his whip on the shutters, but all is locked and barred.

He whistles a tune to the window, and who should be waiting there

But the landlord’s black-eyed daughter,

Plaiting a dark red love-knot into her long black hair.