You won’t regret listening to this melody!

They call her Selkie. Muireann O’Malley often felt she was born of the sea but refuses to let sentimentality stand in the way of her crusade to protect the shore she has wandered since a small child. A patch of West Clare, Ireland, and a derelict building are all that stand between the cliffs she loves and the callous grip of progress.

Tynan Sloane should be content with success, but a dream beckons. O’Fallon’s Pub in historic downtown Boston is for sale and Tynan wants to make it his. An unexpected inheritance of land in the west of Ireland could provide the financing he needs. He doesn’t expect his quick trip to sell the land to rekindle youthful passion.

Fifteen years ago, they had an adolescent crush. Now disparate ambition and a legend as old as Ireland herself stand between them. Will love and myth collide to bring them together or tear them apart? 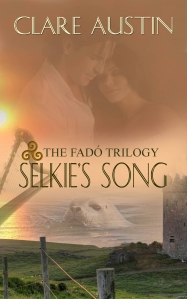 Another wave, stronger than the last, struck with an

explosive boom against the cliff wall. Ty braced for the

hard as bullets against his body. The force hit him and

he slammed hard onto the sandy bottom before popping

up again to catch a breath on the surface.

Ty kicked his legs and stroked through the water

with his free arm. He was an inefficient swimmer and would make very slow progress. He just hoped he

wouldn’t be pushed farther out by each successive thrust of the sea. Off in the distance he could hear Cú howl. As the

water once again receded, Ty gained a bit of purchase with his feet on the sea floor.

The next sea surge slammed his head back as though he’d been punched by a giant’s fist. Air expelled from his already burning lungs and made it impossible to hold onto breath. His head spun and blackness tried to take his consciousness. Uncontrollable shivers seized him. He fought the urge to let the sea float him away in the chilled depths.

I don’t make promises I don’t intend to keep.

This became his mantra as he held his breath in preparation for another assault. Ty swam, pulled, scrabbled, and

fought…for his life, for Dervla, for Muireann.  He battled for his integrity, for his manhood, for everything he believed family, love and life deserved from him. Dervla slumped against him. Cú howled.

I don’t make promises…His arms burned. I don’t intend to keep…His legs kicked, teeth gritted, and anger he’d never felt toward any person gathered from theinnermost parts of him and aimed indignant fury at the

forces in his way.

And at fate. A fate with which he refused to

Clare will be awarding a print (US only) or digital copies (international) of the first two
books in the series, Butterfly and Angel’s Share to a randomly
drawn commenter during the tour. 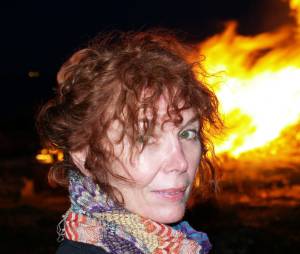 A word about the author…

Clare Austin submitted her first manuscript to a publisher at the age of eight years. She wishes she still had that rejection letter.

Many years and not a few stories later, with characters knocking at the inside of her cranium and begging to be released, Clare’s romantic comedy, Butterfly, was published. There followed a suspenseful sequel, Angel’s Share, and Hot Flash, a women’s fiction/romance for mature women and the men who love them.

Clare lives in the beautiful Rocky Mountains and enjoys her horses, playing her violin, and traveling to Ireland every summe

The Romance Reviews:  The world the author has created is a captivating story with a steady paced
plot, vivid details and compelling characters that grab the reader’s attention
and keep it to the very end. The author portrays the characters’ emotions and
personalities with an intensity and clarity that bring them to life, making it
easy for the reader to relate to them. The conflict with the serial killer is
well developed and the author paints the action and suspense with great detail
engaging the reader’s imagination.

This handsome gentleman is something like what I envision Sterling though Sterling’s hair would be paler:

BLURB:  How can Katy McCaully resist Sterling Fox?  At fifteen, she fell in love with a man in apainting, and he looks exactly like that Novgorodian knight.  Even though he’s got the keys to her chemistry set, she mustn’t succumb to his charms.  She’s a forensic psychiatrist working with Scotland Yard.  He’s a high-profile journalist who invades the underworld for a story or broadcasts live at the
scene of the world’s worst tragedies.  Police and media do not mix.  Katy doesn’t know they are both trying to capture the same serial killer.  Modern London doesn’t know that the Vampire Slayer has also killed four vampires.

SCENE:   The hero Sterling Fox has awakened from a nightmare to be summoned to a conference call with the Chief Councilor of the Vampyre and Sterling’s friend Morgan:

“Another vampire is dead,” Lucien said.  “Cabot was destroyed an hour after sunrise.”

“Cabot?  Pity.”  Morgan was probably staring out the window at the night, brooding.  He did a lot of that these days.

“And you, Lucien, are a pompous ass,” Morgan said, a piano note chiming in the background.  “Endearments aside, what do you suggest we do?”

“Where is the body?”  Sterling crumpled a credit card receipt from Cabot’s Café Nuit and tossed it into the brass umbrella stand by the door.

“How was he destroyed?”  Morgan asked.

Lucien’s voice dived from alto to bass.  “The killer caught him asleep.  A neighbor heard noises, peeked out the window, saw the French doors ripped off their hinges and a cloaked figure running down the street.  She called the police.”

A lighter clicked.  When Lucien exhaled, Sterling could almost smell the smoke from an expensive cigar.

“Cabot was staked through the heart,” Lucien said.  “Immobilized then decapitated.  This psycho mocks us with vampire-like murders, puts our name in bold print in the headlines.”

“A dual of wits,” Morgan said.

Sterling flopped on the bed, crossing his arms behind his head.  “A call to arms.”

“The proof is on a medical examiner’s table in a Whitechapel morgue.”  Lucien’s fingers drummed on his desk.  “We must destroy the corpse before the ME discovers the dead man isn’t your average bloke.”

At dawn, the cadaver would crumble to dust, opening a dangerous Pandora’s box.  Cabot’s body was absolute proof that vampires weren’t a legend.  His altered physiology would alert the medical examiner.  An in-depth study would reveal DNA mutated by a rare virus, red blood cells that mysteriously paled under a microscope.  Research would confirm that the dead man’s diet wasn’t meat and potatoes.

“Damn, you’re right.  This may require a bit of mental tampering as well.  Meet me at the Queen’s Infirmary in Whitechapel,” Lucien commanded.

“Righty-ho then,” Morgan said as if they were off to a cricket match on the palace lawn.  “See you twenty minutes hence.”

“Sterling,” Lucien aimed a parting shot, “you needn’t join us.  You’ll be of no help.”

Sterling didn’t want or need to get involved in Vampyre politics, but Morgan was his friend—Lucien his enemy—a poker hand he couldn’t resist, whether he won or lost.

Seconds later, Morgan opened the door without knocking.  Sterling slid black jeans over his hips and tugged a black sweater over his tousled hair.

Morgan glided to the bedside table, leafed through the pages of a police thriller Sterling was reading.  “What did you think of Katy McCaully?”

A memory of Katy in her sleek, off-the-shoulder gown flashed through his mind.  Deep inside, something clicked.  It had been so long since anyone engaged his heart, and he didn’t recognize the feeling.

The cover is incredible.  I can’t wait to read the book.  WordPress (since last night) has refused to allow me to post then to post images.  I apologize that I could not include the incredible images.

A young curandera, a medicine woman, intent on uncovering the secrets of her past is forced into a life-and-death battle against an evil Archbishop. Set in the mystic land of Aztlan, The Unholy is a novel of destiny as healer and slayer. Native lore of dreams and visions, shape changing, and natural magic work to spin a neo-gothic web in which sadness and mystery lure the unsuspecting into a twilight realm of discovery and decision.

Lightning streaked across a midnight dark sky, making the neck hairs of a five-year-old girl crouched beneath a cluster of twenty-foot pines in the Turquoise Mountains of Aztlan stand on end. The long wavy strands of her auburn mane floated outward with the static charge. It felt as though the world was about to end.

Seconds later, lightning struck a lone tree nearby and a crash of thunder shook the ground. Her body rocked back and forth, trembling with terror. She lost her footing, sandstone crumbling beneath her feet, and then regained it; still, she did not feel safe. There appeared to be reddish eyes watching from behind scrub oaks and mountain pines, scanning her every movement and watching her quick breaths. Then everything became silent.

The girl leaned against the trunk of the nearest tree. The night air wrapped its frigid arms tightly around her, and she wondered if she would freeze to death or, even worse, stay there through the night and by morning be nothing but the blood and bones left by hungry animals. Her breaths became quicker and were so shallow that no air seemed to reach her lungs. The dusty earth gave up quick bursts of sand from gusts of northerly winds that blew so fiercely into her nostrils that she coughed but tried to stifle the sounds because she didn’t want to be noticed.

One randomly drawn commenter will receive the choice of a $50 Amazon/BN gift card.