One random commenter will win a $50 Amazon/Barnes & Noble Gift Card – enter to win: a Rafflecopter giveaway

I asked the author what inspired the gods and goddesses in Anthem’s Fall.  Here is the interesting answer:

The race of men and women on Anthem uncovered their godlike power in an ancient and victorious war for survival. Their power is called Sejero genetics, and it has been passed down through the heredity of several Royal bloodlines for two thousand years.

When these people, or rather some of these people, were given the strength of gods, they abandoned the things that made them men. An important aspect of Anthem is that not everyone is extraordinarily powerful. Some classes of the populace are entirely “regular”. It’s a world not unlike ours, except for the fact that some men harbor impossible power on their blood.

The most omnipotent among them long ago created an empire unchallengeable for all of future time. No weapon can harm their perfect flesh, no technology can trump their transcendent selves, and no one can possibly dream of overthrowing their rule. At the apex of this power structure is House Epsilon, the purest family bloodline of the dynastic empire.

Yet this world of gods is only introduced at the moment of its fall. For a new technology is created on Anthem, and with it are born terrible machines created using the very power behind their strongest sons and daughters—Sejero genetics. The machines come to topple the cities of Anthem to the sounds of a holocaust, and bring a race of warrior-gods to its knee.

When I conceived the world of Anthem, I hoped to create a vision of a future that looked paradoxically more like our past than any genre-established depiction of a sci-fi future. I like to call Anthem my own little anti-dystopia. It’s a terrible place to live, and one that is home to historic and modern atrocity. Anthem is futuristic, and has advanced technology, but I think you’ll find it reminds you more of ancient Sparta than a futuristic society you might expect in a science fiction novel. It’s a world run by warriors, brutal and cruel. They live by the code that the strong must overcome the weak lest the strong become weak in turn.

The Epsilon Empire isn’t ruled by subtlety or any “Big Brother” kind of complex hegemony. The fists of a few men with horrendous inborn prowess rule Anthem. On the other side of the spectrum, it’s also not depicted as a Valhalla, Asgard, or Krypton with larger than life “fatherly” figures with altruistic agendas. It’s a brutal place run by…well, bastards.

And their whim is the law.

In the moment of Anthem’s fall (as in, Anthem’s Fall), the fate of this strange world and our world will be decided upon by only two young men—the newly made emperor of Anthem and a lost exile banished for refusing to partake in the genocide of an inferior race. Each one of them is the son of a powerful family, and to us they are gods. But they may find that they’ve underestimated the novel’s heroine, a young scientist living in New York City.

Above a horrified New York City, genetics and ethics collide as the fallen emperor and a banished exile of the same herculean race ignite into battle over the city’s rooftops. In the streets below, a brilliant young scientist has discovered a technology that can defeat them both, yet might be more terrible than either.

Set both in modern New York City and in the technologically sophisticated yet politically savage world of Anthem, Anthem’s Fall unfurls into a plot where larger than life characters born with the prowess of gods are pitted against the shrewd brilliance of a familiar and unlikely heroine. 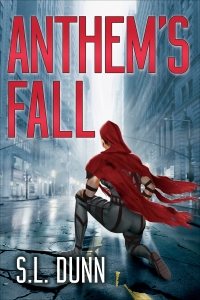 The sharp knife of apocalypse struck without warning, burying itself into the unsuspecting skies of a sun-swept afternoon.

In the northernmost continent of Anthem, the remote city of Municera abruptly reported massive and inexplicable reports of rioting and hysteria. The limited transmissions that came out of the city were fragmented and unclear. Imperial Army regiments were at once dispatched to restore order to the city of Municera, yet all troops lost radio contact within minutes of their arrival. Powerful reverberations shook through the surrounding lands, reaching miles in every direction. It felt as though the gods themselves were hammering the very world with furious impacts. From a distance, billowing black pillars of smoke could be seen reaching high into the sky above the smoldering city. When the smoke and cloud of ash dispersed in the northern winds, the glimmering skyscrapers that had long been an icon of the elegant Municera had vanished from the skyline. Their steel and glass splendor was replaced with a blanket of alarming ruin. By midafternoon, the once prominent city was nothing more than wreckage against the horizon.

Most disturbing were the spreading rumors that a number of Imperial First Class soldiers had flown into the chaos of Municera and had yet to return.

The migration out of the region—an anticipated exodus for which the Imperial Council had quickly prepared—never arrived, and as a disquieting sun set on the remaining cities of the Epsilon empire, the truth became increasingly clear. There were no survivors.

Municera had been home to seven million Primus.

S.L. Dunn is the debut author of Anthem’s Fall, a novel he wrote amid the wanderings of his mid twenties. He has written while living intermittently in St. John USVI, Boston, Maine and Seattle. Raised on big screen superheroes and pop science fiction, he sought to create a novel that bridged a near-sci-fi thriller with a grand new fantasy. He currently resides in Seattle with his girlfriend Liz and their dog Lucy, and is hard at work completing the next book of the Anthem’s Fall series. Get in touch at www.sldunn.com.

FOR MORE CHANCES TO WIN THE $50 GIFT CARD, follow the author on tour:

Christopher will be awarding a $50 Amazon/BN GC to one commenter during his tour. a Rafflecopter giveaway

The machine believed it knew best how to save humanity… even if doing so meant destroying half the population.  Astrophysicist Doug Lockwood’s unusual discovery during his observation of the sun kicks off a chain of events that nobody could have foreseen. The powerful political and military influences that compete to deal with his discovery set Lockwood on a course which will carry him across worlds, and into the grasp of a formidable new intelligence bent on accomplishing its goal at any cost. With Earth itself at stake and time running out, Lockwood and his team must find a way to counter this unprecedented threat before the powerful new enemy completes its plan. Two civilizations are pitted against each other in a desperate struggle for survival.

Bishop was wondering how long he could hold his position when he heard a noise behind him. He turned to see a floor plate rising. Two mechanical hands pushed up the plate from below, then tossed it aside. The RAKER used its powerful arms to quickly lever its bulk up from the floor beneath and climb out. Bishop stared at the RAKER, momentarily astonished at what he was seeing. He briefly considered shooting, but immediately realized his weapon would be next to useless against the armored android. The RAKER looked at Bishop and then deftly grabbed the pistol from his hand. Bishop, for all his training and experience, was startled. He had never seen anything that big move that fast. He just dropped his hands to his sides and took one step back. The RAKER ignored him and strode out into the corridor.

As soon as they saw the RAKER the tactical squad opened fire. The bullets were deflected off the androids advanced armor. It raised the handgun and fired expertly. Both soldiers fell to the floor, dead. The android picked up one of the assault rifles and tossed the Glock back along the floor to Bishop.

Christopher A. Gray is a professional freelance writer living in Toronto. He has been a sales agent, project manager, actor, filmmaker, comedy writer & performer and world

For more chances to win, follow Christopher on his tour: