This post is part of a virtual book tour organized by Goddess Fish Promotions. Barbara Whitaker will be awarding a $20 Amazon or B/N GC to a randomly drawn winner via rafflecopter during the tour. Click on the tour banner to see the other stops on the tour. 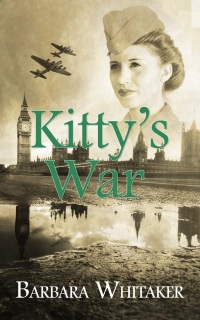 Seeking adventure, shy Kitty Greenlee joins the Women’s Army Corps. In 1944 England, as secretarial support to the 8th Air Force, she encounters her dream man, a handsome lieutenant who only has eyes for her blonde friend. Uncomfortable around men, Kitty doesn’t think the handsome officer could want someone like her.

Recovering from wounds, Ted Kruger wants to forget about losing his closest friends and have fun before returning to danger as a bomber navigator. When Ted recognizes Kitty as the girl who rescued him two years before, he must choose between dating the sexy blonde or pursuing quiet, serious-minded Kitty even though he knows he’s not nearly good enough for her.

As the war gears up with the D-Day invasion, will Kitty and Ted risk their hearts as well as their lives?

It’s all part of the adventure.

Corporal Katherine Ilene Greenlee had reminded herself all the way across the Atlantic. The thrill of exciting voyages to exotic locations had spurred her to volunteer for overseas duty. After fourteen days on a rolling ship with her stomach churning like the waves in a storm, she wasn’t so sure about her decision.

She stumbled onto the gangplank. The heavy duffle bag, balanced precariously on her shoulder, toppled forward and bumped the girl in front of her. One hand went instinctively to her head to keep the steel helmet from falling as she regained her equilibrium.

“Watch it,” the girl complained.

Katherine drew a deep, fortifying breath and straightened under the weight of the bag plus all her other gear. She held tighter, determined to carry it all despite her screaming muscles and roiling stomach.

If she had learned anything in this woman’s army, it was to carry her own load and not ask for help. There had been times when she hadn’t thought she was strong enough to make the grade, but stubborn determination kept her going. She had to prove to herself and everyone else that she could do it.

By rights she shouldn’t be here at all, shouldn’t even be in the Women’s Army Corps. No one knew the truth, no one except her brother, who wouldn’t dare tell, and her father, who’d been so certain she’d fail that he’d let her go without a word of objection.

Barbara grew up in a small town in Tennessee where the repeated stories of local and family history became embedded in her psyche. Fascinating tales of wartime, from her parents and her in-laws, instilled an insatiable curiosity about World War II. After retiring from her sensible career in accounting, she began full time pursuit of her lifelong love of historical romantic fiction. Enjoying every minute of research, Barbara spends hours reading, watching old, black-and-white movies and listening to big band music.
Although Barbara and her husband have been longtime residents of Florida, they both still think of Tennessee as “home.” Visit Barbara’s website at http://barbarawhitaker.com. Or find her on Facebook at https://www.facebook.com/BarbaraWhitakerAuthor.

Buy Links and Other Links: